Some Brief Thoughts on Love, Relationships, and Characters in Fiction

Over the course of the past couple of days, I’ve been thinking a lot about relationships. Fiction focuses so much on characters, that I suppose it should come as no surprise that their relationships are so often central to the story. What would Don Quixote be without his Sancho Panza? Holmes without his Watson? C-3PO without his R2? Could we even have a Romeo without a Juliet? Or Cyrano without Roxanne?

A Typology of Fictional Relationships

There are as many types of fictional relationships as there are real relationships. We’ve got friends (Frodo and Gimli), partners (Holmes and Watson), lovers (Othello and Desdemona), rivals (Taran the Assistant Pig-Keeper and Ellidyr), and enemies (Val Jean and Javert), and a million and one shades of interstitial grey. But each type of relationship has some defining characteristics.

NOTE: Since I’m in a good mood, I’m going to skip the darker end of the relationship spectrum. I might share some thoughts on villainy and antagonism later (probably around election season) but for the time being I’m going to focus on the healthier relationships.

Friendship in Fiction: Always There, but Separate

Who are the great friends in fiction? They’re not Holmes and Watson: their relationship goes deeper than mere friendship, and has too many characteristics of a fictional partnership to be so easily classified. Instead, I think the defining characteristics of friendship in fiction is when the characters retain independence. Partners cannot exist without each other: they need each other to form a single complete unit. But friends can have lives and stories of their own: they are not defined by their relationship. 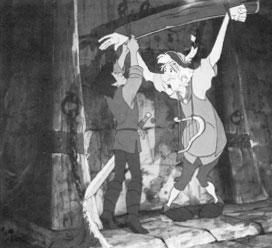 Taran Releasing Fflewddur Fflam in The Black Cauldron, via AnimatorMag.com

Friendships like this that come to mind include Gimli and Frodo (or any of the fellowship other than Sam). There is clear affection between the characters: they care about each other, they can laugh together, are willing to fight and die together…but they are not their respective focuses (focii?). Fantasies have a lot of these kinds of friendships: in the Chronicles of Prydain, Taran has a pair of great friends in Fflewddur Fflam (I bet Lloyd Alexander’s proof-reader or copyeditor had a hell of a time spell-checking that name!) and Doli. Both Fflewddur and Doli could just as easily be the heroes of their own story: we just happen to be observing their actions in Taran’s Chronicles. Friends will always be there for each other, even when – like Gimli or Fflewddur – they go off on their own adventures.

Partnerships are a much tighter bond between two characters. In these types of situations, the duo becomes effectively one character. Sherlock Holmes – the superhuman analytical machine – needs Dr. John Watson to humanize him. Without Watson there to temper the icy scalpel of his intellect, Holmes would be a caricature, not a character. He would be a sad, frustrated, lonely man. And as a fictional construct, we are made to care about Holmes through Watson’s cuddlier perspective.

Frodo and Sam operate on a similar basis. Frodo’s quest defines him. The ring – and his duty – consume him as both an individual and a character. But Sam keeps Frodo firmly grounded in what matters to both Tolkien and – presumably – the reader: friendship, loyalty, and home. Without Sam there to shoulder the heroic burden, Frodo would be a drag (some would argue he still is, though I still like his story…because of Samwise Gamgee). The thing about these kinds of partnerships is that it really takes two to tango: either of these partners alone is only half of a character.

Love: Why do we remember the tragic ones?

I suppose fiction is full of happy love stories. But I spent a good couple of hours trying to wrack my brain to come up with some of them. Invariably, when I think of love stories, my brain goes to tragic romances: Romeo and Juliet, Cyrano and Roxanne, Don Quixote and Dulcinea, Arthur and Guinevere (and Lancelot), Othello and Desdemona. None gets a happily-ever-after.

But not all love stories end tragically, either in fiction or in real life. Marius and Cosette in Hugo’s Les Miserables

. Elizabeth Bennet and Fitzwilliam Darcy in Pride and Prejudice

. Benedick and Beatrice from Much Ado About Nothing

. Or in film, Han Solo and Leia Organa.

Most of the “happy” romances I just mentioned have lovers who are also partners. Unlike regular partnerships, however, each lover is a fully formed character. Holmes, Don Quixote, or C-3PO are rough caricatures without their partners. They could not operate effectively on their own: Cervantes depicts this explicitly in Don Quixote’s adventures before he hooks up with Sancho Panza. But in “happy” love stories, the lovers remain fully formed characters without their partner: they are just not likeable characters.

Benedick and Beatrice both need to have their wits balanced: if Benedick lacked Beatrice’s foil, then he would likely come off as a slightly snarkier version of Iago (ironically, both characters who have been excellently portrayed by Kenneth Branaugh on film). Without Lizzie there to puncture his pride, Darcy would come off as an unbearable ass. And without Darcy to lend Lizzie moral certitude, she would be a fairly bratty busybody. It is through their partners that lovers become loveable.

It all boils down to negotiating intimacy, and happy love stories do so through a combination of partnership and antagonism. It is no coincidence that Darcy/Lizzie, Benedick/Beatrice, Kate/Petruchio, Taran/Elionwy, Han Solo/Leia Organa, or Nick/Norah are defined by their verbal sparring. Without Solo’s irrepressible devil-may-care humor, Leia Organa would be a dull-as-doorknobs earnest senator. Unlike Holmes or Quixote, she is a fully-formed character without Solo to complete her. But who wants to deal with that level of humorless earnestness all the time? Han Solo makes Princess Leia sufferable, and even likeable.

Why am I harping on relationships, love, and partnerships?

This past weekend, I married the smartest, most beautiful, funniest woman I have ever met. She is my best friend: she’s her own person, independent, strong-minded (extremely so, sometimes), and always there for me. She’s my partner: without her I’m just a caricature of a person. And she makes for a great complementary antagonist, able to poke holes in my (all too common) pretension whenever I need it (which is often). If she weren’t there, I’m sure I would be an insufferable jerk. But because she was silly enough to say yes, I’m hopefully a slightly less insufferable jerk.

She makes me the happiest guy in the world, and so I’m going to sign off from this blog now and go back to enjoying my honeymoon.